Deepavali or Diwali is one of the most popular festivals of India and of Hindus. Diwali symbolizes the triumph of light over darkness, and of good over evil.  Light is a symbol of life and we celebrate this festival with all lamps lit brightly.  Deepavali occurs in the Hindu month of Ashwayuja, also known as Ashwin, according to the lunar calendar, i.e., in the months of October or November.

In Sanskrit, “Deepavali” means a row of lights.  At first, it is a harvest festival, to celebrate the harvest as an occasion, because, Diwali usually comes at the end of the harvest season.  Diwali also celebrated in the honor of the ancestors.  Vedic personalities believed that souls who were not destined for liberation ascended to the ancestral world by the path of ancestors (Pitru marg). Since the path was not as bright as the sunlit path of the immortals (Devayana) people might have held lights and lamps towards the sky on that day in the hope that it would help them ascend to the ancestral world.  References to the festival are found in the Padma and Skanda Puranas.

Deepavali is associated with several ancient legends, such as the victory of  Lord Rama over Ravana and his return to Ayodhya to lead the throne, the victory of Lord Krishna over the demon Narakasura.  The return of the Pandavas from exile, the legend of Nachiketa, who move upward to heaven.  People also believe that on this occasion Goddess Maha Lakshmi visits the homes of her devotees and blesses them.  Goddess Maha Lakshmi, who symbolizes all the positive forces of life and the divine aspect of wealth and abundance, represents omnipresent and pervasive health, wealth, happiness, victory, courage, harmony, beauty, joy, and enlightenment.

Diwali is celebrated not only in India but in all the countries such as Nepal, Sri Lanka, Mauritius, where most of the Hindus resides.  On the night of Diwali, streets and public places or in front of their own houses to witness the celebration of joy all over India become filled with adults and children alike and loud sounds from the firecrackers.  Deepavali is celebrated as five days festival in most of the parts of India.

The first day of the festival is known as Dhanteras or Dhantrayodashi.   Dhan means wealth, and Trayodashi means 13th day.  It is believed that Lord Dhanwantari emerged from the ocean holding the knowledge of medicine, to help mankind fight against sickness, disease, and death.  On this day people light lamps and worship Goddess Maha Lakshmi along with Lord Yama, Lord of Death.  Yama Deepa Daan is also performed, which means lighting diya on both sides of the main door for the whole night continuously.

The second day of the festival is known as Naraka Chaturdasi means the 14th day.   It is considered to be celebrated to eliminate the idleness and evil from our life.  According to the legends, on this day Lord Sri Krishna, supported by his consort Satyabhama killed the demon Narakasura. In the process, he also freed 16,000 divine energies of the Goddess, which were held forcibly until then by the demon.  It is also believed that on this day Lord Vishnu incarnated upon the earth as Vamana to force down King Bali.

The most important ritual of the Naraka Chaturdashi is, people wake up early in the morning before sunrise applies sesame oil, herbs to the head and body to take a holy bath or Abhyanga Snan.   Lord Krishna was believed to have done after his victory returned from the battlefield.

The actual Diwali is celebrated on the third day of the festival when the moon completely wanes and total darkness sets in the night.  On this day people worship Goddess Maha Lakshmi with traditional chants, rituals, new clothes, fruit and flowers, sweets, light, sandal paste, incense, rice, turmeric, and vermillion.  Money and valuables are placed before the Goddess during the puja, at the end of the worship, prasadam is offered to the family members and friends.  In the evening houses and streets are well decorated with innumerable lights and lamps.

According to a legend, on this day Lord Krishna completed his incarnation upon the earth and left this world.   Another popular legend, on this day Nachiketa, received divine and secret knowledge of immortality from Lord Yama.  In Jain tradition, it is believed that Lord Mahavira, the last of the Thirthakaras, attained Nirvana on this day.

The fourth day is variously known as Kartika Shudda Padyami, Padwa, and Varshapratipada.   According to a legend, at the will of Lord Krishna, the people of Braj worshipped the  Govardhan Parvat on this auspicious day.  In the land of Braj even now people continue the tradition of worshipping Govardhan Parvat.  This is to calm down and soothe the forces of Nature.  In Mathura and in other Krishna temples in north India, Abhishek done to the idols Lord Krishna and Radha, decorate them with shimmering ceremonial clothes and jewelry.  Business people begin the new financial year and offer prayers for good luck and prosperity.

On the fifth day, the festival is known as Bhai Duj. On this day brothers and sisters get together to make stronger bonds of love and affection and celebrate the occasion.  Sisters put tilak usually with vermilion, on their brother’s forehead and wish them long lives.   According to a legend, the tradition begins when the Yamuna, the sister of Lord Yama honoured her brother with a tilak on his forehead and wished him long life.

Diwali is an auspicious occasion and a sacred opportunity to bring cheer and happiness in a world which is worried by egoism, greed, arrogance, and selfishness.   Goddess Lakshmi will be truly pleased if you become a lamp to others and direct her light, wealth, and abundance to them. Let you be a lamp in the darkness of ignorance and suffering and spread light in the lives of others. It is better than living selfishly and collect offense. Wealth is truly divine. It remains divine only when it is spent for good causes and with the right intentions to promote harmony, happiness, and spiritual wellbeing.

Excessive and unrestricted use of firecrackers is a public nuisance and a source of pollution.  Hence, introspection may be required. Let’s examine the issue with reason, it makes sense for each family to minimize the expenditure on firecrackers, at least by avoiding the purchase of certain types which are expensive, hazardous, and create noise pollution. Instead, they can spend that money for a good cause such as giving contributions to an organization, or a needy person. They can still celebrate Diwali with lamps, and other festivities. 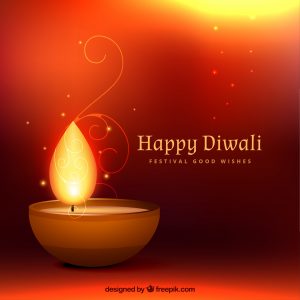