Dussera Navaratri is the most popular ten-day festival celebrated throughout India in the month of Ashvayuja or Ashvin. According to Hindu mythology, in northern parts of India, Dussera is celebrated with much fervour as demon Ravana, King of Lanka was defeated and killed by Lord Rama in the battle, victory here signifies good over evil. A model of Ravana is burnt on Vijayadasami, (tenth day) of Navaratri as ‘Ramlila’.  And in Southern parts of India, Dussera is celebrated with great dignity and respect as, Ma Durga on a ninth day killed demon Mahishasura known as ‘Mahishasura Mardhini’ and the last remaining day celebrated her victory as ‘Vijayadasami’, which brings peace to the world.

Navaratri festival is a nine-day puja celebration to nine forms of Goddess Durga (Parvati) as Nava Durga, if worshipped with religious dedication and enthusiasm during Navaratri, it is believed that these nine days lift the divine spirit in us and fill us with joy.

Here nine different forms of Goddess Durga are worshipped, which has a unique significance. 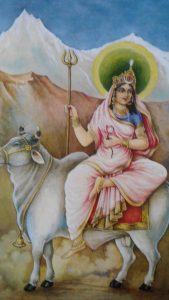 Shaila Putri, Bala Tripura Sundari: Ma Parvati born as a daughter to Parvatraj Himavant and Mena Devi, so, she named ‘Shaila Putri’ or ‘Bala’. Goddess is also called ‘Hymavati’.  In her previous birth, she born to Daksha Prajapati as ‘Sati’.

Shaila Putri is the first among Navadurgas. Her worship takes place on the first day of Navaratri.  She lay on the bull with trident and lotus flower on each hand.

With the adoration of Goddess as Bala on the first day of Navaratri, sadhak starts his or her sadhana by positioning their awareness at Muladhara Chakra.  Bala Tripura Sundari Devi is a combination of three Goddesses, Lakshmi, Saraswati, and Parvati. She blesses her devotees with Wealth, Wisdom, and Vigour.

Bramhacharini, Annapurna Devi: She is worshipped on the second day of Navaratri.  Bharmacharini means who follows earnest austerity.  She holds rosary and water pot in each hand. Sadhak places his or her awareness at Swadistana Chakra for a stable state of mind worships this Goddess, which intensifies their Bhakti. With her radiance and virtue, she sanctifies all beings.

Ma Annapurna holds rice boul in her hand and nourishes all living beings with love to fulfill their needs and wishes.  Goddess gives the first biksha to Lord Shiva.

Chandraghanta, Gayatri Devi:   Goddess Chandraghanta is worshipped on the third day of Navaratri, she sat on the lion and holds a rosary, bow and arrow, lotus, trident, sword, water pot, and mace with protection and safety assurance (Varada and Abhaya hasta) in all her ten hands to protect all living beings from evil.  She has a crescent moon on the forehead which is in the shape of ‘Ghanta’ so she is called ‘Chandraghanta.’  The sound of ghanta alarmed demons, on the other hand, brings sadhak awareness to Manipura Chakra, there they listen to melodious sound vibration of ghanta.

Ma Gayatri is called ‘Veda Mata’ because all Vedas evolve from the Gayatri mantra itself.  Goddess rested on lotus with five faces which specifies ‘Pancha Bhutas'(air, water, fire, ether, and earth), all the essential gist of life is fulfilled with her kindness.

Kushmanda, Lalita Devi:  She is worshipped on the fourth day of Navaratri, she sits on a lion with rosary, mace, water pot, bow and arrow, lotus, disc, and Amruta Kalasam in her eight hands.  ‘Kushmanda’ is a Sanskrit word that means Pumpkin, she likes breaking pumpkin as an offering to her.  She has a golden radiance that resembles Sun rays in the Universe, which is the only life source for all creatures. Sadhak awareness is positioned at Anahata Chakra by worshipping Goddess Kusmanda.  One who aspires to earthly and eternal growth or happiness must worship Goddess Kusmanda.

Ma Lalita Tripura Sundari Devi is worshipped on the fourth day of the Navaratri.  She is the creator of the Universe, also worshipped as ”SriChakra Sancharini”, which means she resides on ”Sri Chakram”.  Goddess arouse from the holy altar by contributing all the powers and weapons of Gods and Goddesses including Lord Shiva to kill demon Bhandasura to pacify and guard the universe. 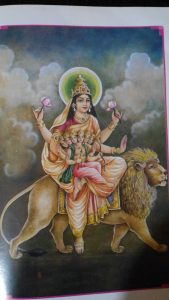 Skanda Mata, Maha Lakshmi:  Ma Durga’s fifth form on the fifth day of Navaratri festival is ‘Skanda Mata’, she sat on Lotus along with Bala Subrahmanya on her lap with six faces, child form of Lord Kartikeya. Goddess with her four hands (Chaturbhuja) holds Lotus on her upper hands, right hand on Lord Skanda, and Abhaya mudra with the left hand.  Those who worship Goddess of this form on the fifth day get sure success in their worldly activities.

Sadhak concentrates on Vishuddi Chakra with complete focus on his or her thought and mind will progress in sadhana by the grace of Goddess.

Maha Lakshmi puja on the fifth day of Navaratri brings happiness and wealth to uplift mankind in all aspects of life.  Being a consort of Lord Vishnu, she gives all material fulfillment, contentment and along with this she also shows love and grace. 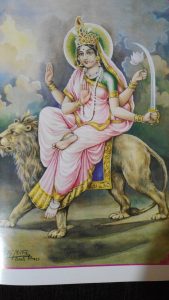 Katyayani, Maha Saraswati:  On the sixth day of Navaratri Goddess is worshipped as ‘Katyayani’. Kata Maharshi’s son Katya or Katyayana rishi perform austerities and great penance to get Ma Bhagawati as his daughter, to punish evil. For this good cause trinity,  Lord Bramha, Vishnu, and Maheswar contribute their powers for the formation of Goddess Katyayani, as a daughter to Katyayana rishi.  Goddess born on Bhadrapada Bahula Chaturdasi.  Sage Katyayana worships Goddess on Ashvayuja Saptami, Ashtami, and Navami to kill demon Mahishasura, on the day of Vijayadasami victory of Goddess is celebrated.

To get Lord Krishna as a husband, Gopis worship Ma Katyayani on the banks of the Yamuna river, she is very graceful, sat on a lion, having golden radiance with a sword, lotus, Varada, and Abhaya mudras on her four hands. The awareness of sadhak established at Agya Chakra, which is very essential and a key principle to show complete dedication and devotedness at Goddess for liberation of the soul.

Maha Saraswati Devi is worshipped on the sixth day of Navaratri. ”Saraswati” is a Sanskrit word, which means movement or flow of knowledge.  She is the mother of ”Vedas”.  Divine wisdom is extremely charming like a beautiful woman, with her grace, one can attain divine knowledge and intelligence.  Students by performing Saraswati puja on this day of Navaratri will surely achieve the grace of the Goddess to attain knowledge and fulfill their goals. 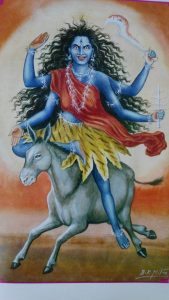 Kaalaratri, Durga Devi:  Goddess Durga form on seventh day of Navaratri is Kaalaratri.  Goddess Kaalaratri sat on a donkey with four hands, right side with two hands Goddess shows protection and safety assurance, on both left hands she holds a sword and thorn-like iron weapon, she has three spheres like round eyes, she wears ornaments like a flash of lightning and with jumbled hair. Her appearance is very frightened one for evil and demons, but very much beneficial for devotees.

Sadhak awareness situated on Sahasrar Chakra on this day is completely in control of Goddess, his or her consumption and success in this path of salvation gives infinite sublime and wonderful realm.

On this day Goddess is worshipped as ‘Durga Devi,’ because she killed the demon Durgasura in the battlefield.  Goddess sat on a tiger with eight hands holds different weapons to protect mankind and punish evil.  On the eighth day of Navaratri Durga Puja is celebrated as “Durgastami”, in many temples ”Chandi Homam” is performed to sanctify the ecosystem. 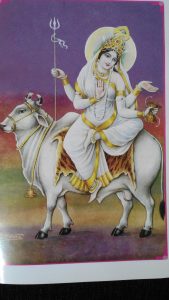 Maha Gauri sat on a bull with four hands holding trident and abhayamudra on right hands and Varada mudra and small two-headed drum on left hands.  By meditating, worshipping, and reciting the names of Maha Gauri one can free from sins and sadhak would get eternal powers by the grace of the Goddess.

On the ninth day of Navaratri, Goddess is worshipped as ”Mahishasura Mardini” form.  According to legend Goddess Durga killed the demon Mahishasura on this day, he had a boon from Lord Bramha that no man could be able to kill him, he had never considered women at all.  So, Lord Vishnu made a plot to kill this demon by requesting Goddess to take birth.  The actual inner meaning for this form of Ma Durga is to kill ”Arishadvargas”(Kam, Krodh, Lobha, Moh, Madh, and Matsarya) in all of us.  On this day in some parts of India mostly in South India, people do ”Aayudha Puja,” puja done to heavy machinery, vehicles, etc., 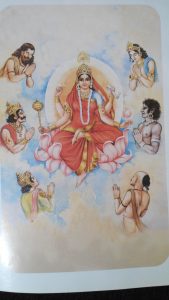 Siddhidhatri, Rajarajeshwari Devi:  The ninth form of Goddess Durga is ”Siddhidhatri,” meaning she can give eternal success and worldly pleasures to everyone.  According to Bramhavaivartana Puran, eternal success (Siddhi) is given as of 18 ways, they are:

According to Devi Puran, Lord Shiva gets half women to form i.e., Ardhanareeshwara, as well as he also attains all eternal powers by the grace of this Goddess.  Siddhidhatri sat on Lotus with four hands holding a sphere, mace on both right hands and conch, lotus on both left hands. Everybody must strive for the benevolence and kindness of Goddess Siddhidhatri always. Sadhak gets liberated from a gloomy, miserable state and achieves self-enlightenment.  Those who develop with wonderful qualities of devotion to Goddess Siddhidhatri will never have to face any disappointment and distress in life.

On this day Rajarajeswari Devi is worshipped and this day is popularly known as ”Vijayadasami,” victory of Goddess Durga is celebrated as Victory of good over evil. This day if we start any business, new home, etc., anything for good cause will be fruitful.  Rajarajeswari Devi is worshipped by all Gods and Goddesses with complete faith and belief to accomplish their jobs.