e day to celebrate the birth of  Lord Krishna, (Sravana Bahula Ashtami) i.e., on the eighth day of the new moon fortnight in the month of August or September.  Krishnastami also called as Janmastami or Gokulastami in India. People all over the world celebrate this festival with a lot of enthusiasm and dedication. On this day, Lord Vishnu is aroused to bestow us with good luck and prosperity, to fulfill all our wishes. One of the popular events in this festival is breaking the pot, filled with curd and flattened rice (chudava or poha), this event is fully enjoyed by everybody with happiness in India.

Lord Krishna along with Radha Devi is worshipped on this day. The concept of God completes with himself and his energies which are impossible to differentiate, such kind of relation between Radha-Krishna is the highest form of devotion where the human soul wants to unite with the ultimate Supreme or Almighty.  Actually, Radha embodies the totality of love for Krishna. She personifies ‘Bhakti‘ for the Lord.  Indeed, she herself was the loving devotion to God. She awakes us to the love of Krishna.

Legend:   According to Hindu mythology, King Kamsa who is the maternal uncle to Lord Krishna was a very cruel personality, imprisoned his own father Ugrasena for the greed of the throne.

On the prophecy that Devaki, Vasudeva (sister and brother-in-law of Kamsa), their eighth child will kill him than Lord Krishna born to them as an eighth child, in his later years Lord Krishna killed Kamsa.

Vasudeva took that newborn child, crossed River Yamuna which was in floods at that time gave a pathway to Vasudeva on that stormy dark night.

Many legendary tales regarding Lord Krishna when he was a child is known as Bala Leela, in that, killing demoness Pootana, Shakatasura, Trunavarta is worth mentioning.

To save his friends and the people of Gokul from the poisonous huge snake, who lives in the River Yamuna, Lord Krishna did Kaliyamardhanam. 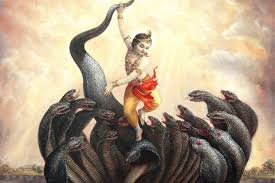 Actually, the representation of Gokul, cowherd, people of the village, the birth of Lord Krishna, Rasaleela, Kaliyamardhanam in a diminutive tableau way is very enjoyable on that day.

Krishnastami Ritual:  People perform Krishnastmi puja at midnight according to their customs and traditions. The family gather at one place and observe the fast the whole day, perform aarti and bhajan to Sri Krishna and Radharani in the evening, decorating with the footsteps of Bal Gopal as to welcome Him to their houses because Lord birth on this earth to destroy evil. Raasa Leela is the most famous dance performance of Lord Krishna that is still followed in India.

Besides these, sweets made with milk, ghee, butter, and flattened rice prepared in large quantities for the midnight puja because Sri Krishna is fond of these items. 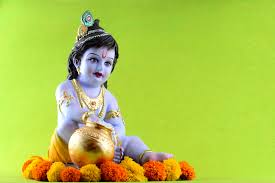 Krishnashtami puja starts at midnight when devotees lit diyas, bathe the idol of Sri Krishna with Panchamrut and Ganga Jal, that idol is ornamented with beautiful clothes, jewels decorated with flowers, tilak, incense, and vermilion, placing Bal Gopal idol in the cradle.

Different food items were served to Lord as Naivedya, devotees sing aarti to Sri Krishna and Radha Devi. After that people break their fast by eating prasad.

Teachings of Lord Krishna: On the event of Krishastami celebrations, let us rejoice in the glory of the Lord and learn some of the important lessons that He has stated in the Holy Bhagavat Gita. It is known as the Gita and is part of the ‘Itihaas: Mahabharata’, it is in the form of a dialogue between Lord Krishna and Arjuna on the battlefield of Kurukshetra.  God explains to Arjuna his duties as a warrior.

These teachings are campaigned by a number of devout gurus, sages from past to present.  The essence of the Bhagavad Gita is the explanation of five basic truths, they are:

The fundamental message of Bhagavat Gita is:

Meaning: One should fulfill one’s sense of duty bravely and with selfless dedication, this is called Svadarmacharana.

Five principles that Lord gifted to mankind are:

It is definite that these principles conclude the essence of everything else spoken in Bhagavat Gita by God.