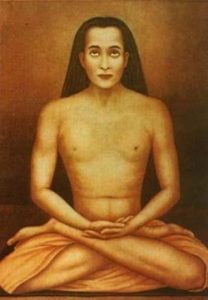 Mahavatar Babaji was a great Yogi, Siddha, who attained ultimate grandeur, and who worked silently in the background for the spiritual evolution of humanity. Over the centuries, Babaji has continued to guide and inspire great saints in Kriya Yoga and many spiritual disciplines, in the fulfillment of their mission. These include Adi Shankaracharya and Kabir, the 15th-century saint. Both are said to have been personally initiated by Babaji, he has maintained the extraordinary presence of a youth of about 24 years of age.  Although Babaji prefers to remain unknown and invisible to others, he occasionally and gradually reveals himself to his disciples, capturing their hearts in various types of personal devotional relationships in which he guides them in their development. His relationship with each disciple is unique.

According to some texts,  Babaji was given the name “Nagaraj“.  His parents were Nambudri Brahmins who had immigrated there from the Malabar coast on the western side of South India. His father was the priest in the Lord Shiva temple, which is today a temple dedicated to Lord Subrahmanya Swami.  He was born on the 30th day of November 203 A.D., in a small coastal village now known as Parangipettai, in Tamil Nadu, India, near where the Cauvery River flows into the Bay of Bengal.  He was born in Rohini Nakshatra,  in which Lord Sri Krishna was also born. The birth took place during the celebration of Kartika Deepam, the Festival of Lights, the night before the new moon during the Tamil month of Kartika.

At the age of 5, Nagaraj was kidnapped taken as a slave to Kolkata.  A merchant purchased him, only to give him freedom. He joined a small group of wandering monks, and along with them, he learned the sacred religious and philosophical literature of India. However, he was not satisfied. Hearing of the existence of a great Siddha, named Agastya Maharshi, in the South, he made a pilgrimage to the sacred temple of Katirgama, near the southern end of Srilanka. There he met a disciple of Agastya Maharshi, whose name was Boganatha rishi. He studied “Dhyana,” intensively, and “Siddhantham,” the philosophy of the Siddhas, with Boganatha rishi for four years. He experienced “Sarvikalpa Samadhi,” and had the vision of Lord Subrahmanya Swami, the deity of the Kataragama temple.

At the age of 15, Boganath rishi sent him to his own guru, the legendary Agastya Maharshi, who was known to be living near Courtrallam, in Tamil Nadu. After performing intensive yogic practices at Courtrallam for 48 days, Agastya Maharshi revealed himself and initiated him into Kriya Kundalini Pranayama, a powerful breathing technique. He directed the boy Nagaraj to go to Badrinath, high in the Himalayas, and to practice all that he had learned, intensively, to become a “Siddha.” Over the next 18 months, Nagaraj lived alone in a cave practicing the yogic techniques that Boganath rishi and Agastya Maharshi have taught him. In so doing, he surrendered his ego. He became a Siddha, one who has surrendered to the power and consciousness of the Divine.  His body was no longer subject to the consequences of disease and death transformed, as a Maha Siddha, Mahavatar. He dedicated himself to the upliftment of suffering humanity.

In 1946, Paramahansa Yogananda, one of modern India’s greatest yogis, revealed in his classic “Autobiography of a Yogi,” the existence of an immortal yogi, Mahavatar Babaji. Yogananda related, how Babaji had for centuries lived in the Himalayas guiding many spiritual souls.

Babaji renews Kriya Yoga, which Patanjali refers to in his famous “Yoga-Sutras.” In it, he defines Kriya Yoga as “constant practice, self-study, and devotion to the Lord.” However, along with what Patanjali described as Kriya Yoga, Babaji added the teachings of the tantra, which includes the refinement of “kundalini,” the great potential power and consciousness, through the use of breathing, mantras, and devotional practices. His modern combination of “Kriya Yoga,” includes a rich variety of techniques.

In 1861 that Babaji initiated Lahiri Mahasaya into his powerful Kriya Yoga system.  In 1942 Babaji prepared to guide two more great souls from South India, S.A.A. Ramaiah, Geologist from Madras University, and V.T. Neelakantan, a famous Journalist.  In 1953 and 1954 Babaji himself appeared before Ramaiah and Neelakanthan for his future works and directed them to do so.  In 1954, near Badrinath, in the Himalayas, Babaji initiated this great disciple, S.A.A. Ramaiah into a complete system of 144 Kriyas, postures, breathing, meditation, mantras, and devotional techniques. Fortunately, Babaji comes out from behind the shrouds of anonymity which he finds so useful for his work. Babaji has appeared to Swami Satyaswarananda in the Kumaon Hills of the Himalayas, in the early 1970s and given him the assignment of translating and publishing the writings of Lahiri Mahasaya.

There is no historical reference to Babaji need not surprise us. The great guru has never openly appeared in any century, the misinterpreting glare of publicity has no place in his plans. As the Creator, Babaji works in humble obscurity.  Babaji, undertake work that is concerned more with the slow evolutionary progress of man.  Such masters always veil themselves from the public gaze and have the power to become invisible.  For these reasons, and because they generally instruct their disciples to maintain silence about them. I give in these pages on Babaji merely a hint of his life.  No facts about Babaji’s family or birthplace, have ever been discovered. His speech is generally in Hindi, but he converses easily in any language. He has adopted the simple name of Babaji other titles of respect given him by Lahiri Mahasaya’s disciples.

Swami Yogananda wrote in his “Autobiography of Yogi” about Mahavatar Babaji, which he listen from Swami Kebalananda, his Sanskrit tutor, he spent some time with Babaji in the Himalayas, is given as it is below for reference:

“The peerless master moves with his group from place to place in the mountains,” Kebalananda told me. “His small group contains two highly advanced American disciples. After Babaji has been in one locality for some time, he says: ‘Dera danda uthao.’ (‘Let us lift our camp and staff.’) He carries a danda (bamboo staff). His words are the signal for moving with his group instantaneously to another place. He does not always employ this method of astral travel; sometimes he goes on foot from peak to peak.

“Babaji can be seen or recognized by others only when he so desires. He is known to have appeared in many slightly different forms to various devotees — sometimes with beard and mustache and sometimes without them. His undeniable body requires no food; the master, therefore, seldom eats. As a social courtesy to visiting disciples, he occasionally accepts fruits, or rice cooked in milk and clarified butter.

“Two amazing incidents of Babaji’s life are known to me,” Kebalananda went on. “His disciples were sitting one night around a huge fire that was blazing for a sacred Vedic ceremony. The guru suddenly seized a burning brand and lightly struck the bare shoulder of a chela who was close to the fire.

“‘Sir, how cruel!’ Lahiri Mahasaya, who was present, made this remonstrance.

“‘Would you rather have seen him burned to ashes before your eyes, according to the decree of his past karma?’

“With these words, Babaji placed his healing hand on the chela’s disfigured shoulder. ‘I have freed you tonight from a painful death. The karmic law has been satisfied through your slight suffering by fire.’

“On another occasion, Babaji’s sacred circle was disturbed by the arrival of a stranger. He had climbed with astonishing skill to the nearly inaccessible ledge near the guru’s camp.

“‘Sir, you must be the great Babaji.’ The man’s face was lit with inexpressible reverence. ‘For months I have pursued a ceaseless search for you among these forbidding crags. I implore you to accept me as a disciple.’

“When the great guru made no response, the man pointed to the rock-lined chasm below the ledge. ‘If you refuse me, I will jump from this mountain. Life has no further value if I cannot win your guidance to the Divine.’

“‘Jump then,’ Babaji said unemotionally. ‘I cannot accept you in your present state of development.’

“The man immediately hurled himself over the cliff. Babaji instructed the shocked disciples to fetch the stranger’s body. After they had returned with the mangled form, the master placed his hand on the dead man. Lo! he opened his eyes and prostrated himself humbly before the omnipotent guru.

“‘You are now ready for discipleship.’ Babaji beamed lovingly on his resurrected chela. ‘You have courageously passed a difficult test. Death shall not touch you again; now you are one of our immortal flock.’ Then he spoke his usual words of departure, ‘Dera danda uthao’; the whole group vanished from the mountain.”

“Babaji has been chosen by God to remain in his body for the duration of this particular world cycle. Ages will come and go — still, the deathless master, beholding the drama of the centuries, shall be present on this geographical stage.”