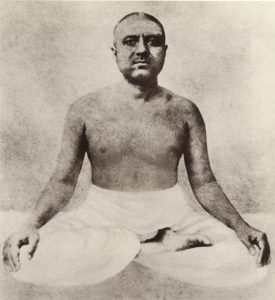 Swami Pranabananda Giri was a “Saint with two bodies.”

“The subtle unity of the phenomenal world is not hidden from true yogis.  They can similarly transcend at will every obstacle of gross matter.”

Swamiji was born in Hoogly Jela, a village of Satgechira in the Guptipara district in a prestigious and prosperous Brahmin family, his father was Girish Chandra Mukhopadhyay.  He was a police inspector, his family lives at Satgechira so Swamiji educated under the guardianship of his maternity uncle. He was a devouted Bramhin, performs puja to Sivalingam and Saligram by reciting sacred hymns from holy scriptures, and teaches Swamiji the wisdom of Shastras in story form.

Swamiji was intelligent, honest, disciplined, generous, and modest from childhood. His natural sense of seriousness and simplicity, and at the same time his sense of humor, noble and arrogant attitude towards life.  He was beloved by everybody, his strange ability to socialize and interact made him loving and deep relationships with everyone.

Spiritual fondness arouses in Swamiji at a very early age, in a short time he became proficient in Kalidasi Mahabharath (a Bengali version of great epic Mahabharatam) which he recited with great enthusiasm and delighted with completely immersed in singing the epic in some musical modus, a deep affection for music also arouse.

Once Swamiji was fallen ill-health severely for a long time, his parents lose hope in him, after a year he recovered slowly. Because of his father’s only son to make his sickly body and mind happy was provided to him. His studies were cast off. He was completely adorned by his uncle and do as he, please. Swamiji made a music band with other village boys and make music. He and his friends also provide help for distressed.  They started performing and gained a reputation with his band along with band head members called Matiray or Ustad at Guptipara and nearby areas, Swamiji likes Ustad, he is an of opium, and Swamiji also began to use that.

At the age of 20, Swamiji’s mother died, she left a baby girl, Swamiji loves his baby sister and he takes care of her very much. His father extremely distressed with his wife’s death, Swamiji never care about that and spent time as he wishes and enrolled in an English school which he loves. At the age of 22, leading spendthrift lavish and never-earning life, helping the poor, paying the expenses of his friends, though life was easy and unburdened his father by seeing told him never return home until he was able to earn by himself and Swamiji left home with determination.

After leaving his family Swamiji went to Benaras, wandering different places he found himself at Tirhoot and joined at Tirhoot State Rail, gradually learned the telegraph there, and became a favourite for his English Supervisor.  Whatever he earns spent on basic needs, opium, music, wandering saints, monks, and the poor.

Swamiji was regarded with great respect at his workplace got a promotion to Samistipur Stationmaster. He was initiated to Tantric Sadhana by some Tantric guru but because of some problem at practice, he left that path.

One day all of a sudden, he left his job, without informing his supervisor. Upon seeing his resignation supervisor called him to talk but that did not happen. After visiting many places, he went to Pashupatinath of Nepal and make familiar with a Government employee and stayed at his residence. At that time, the telegraph was newly introduced to Nepal and had problems at the Telegraph Office, which was resolved by Swamiji and caught the eye of Jang Bahadur, King of Nepal.

The king wishes that Swamiji would live there and by knowing that he was unmarried, arranged a marriage proposal with a Nepalese Brahmin girl, but Swamiji expressed his deepest regrets and returned to Benaras.  At Benaras, he met great Guru Sri Shyama Charan Lahiri Mahasaya, he initiated him to Kriya Yoga.

Swamiji immersed in sadhana and day by day his sadhana got better, his guru very pleased, and gave more instruction upon his path and sent him to Malva mountain to his brother’s disciple to acquire more. Staying there for a while Swamiji gained Siddis and became a Siddha (a realized being). After coming back from Malva mountain, according to the wish of Sri Lahiri Mahasaya, he went to Samistipur to his supervisor, he was overjoyed and accepted him to join back to his job as Stationmaster.

Swamiji’s father was trying to contact him but that he was not successful, again according to the wish of Sri Lahiri Mahasaya Swamiji wrote a letter to his father and send some money.  With the overwhelming joy of knowing the whereabouts of his son after ten years he invited his son to his sister’s marriage and upon clarifying his own sister getting married Swamiji went home met with his father, relatives, and old friends, Ustad his music teacher.

Swamiji’s father asked him to marry and become a householder, Swamiji fulfilled his desire and married the appropriate girl.  After marriage Swamiji by going here and there joined many village boys to Railways. And regularly met his Guru at Benaras, his Guru often asked him to stay nearer, “this time it will happen”, told Sri Lahiri Mahasaya that    E I Railways searching for experienced station master so he may apply.

At this time his father passed away and the family moved to his place and lived together.  Swamiji had one son and a daughter. Subsequently, after a period of married life, his longing to live the life of sannyasi grew deeper.  One day he saw himself as a drug addict and determined strongly to renounce.  After being bedridden for one month he regained his health and never touch opium in his life, only because of his strong will he was able to free himself from addiction.

In the floods of the river, Ganges Swamiji lost his home and gave some money to his father-in-law to construct a new home for him, but he cheated Swamiji with a small to rooms house and used the money to construct his own house. Swamiji’s wife was very attached to live with her parents. Finally, Swamiji decided to quit worldly life and took Sannyas though his Guru Sri Lahiri Mahasaya prohibited him to do so.

Swamiji asked Adhiswar Srimat Swami Atmananda Giri Maharaj of Kailas Math for Sannyas Diksha, he showed some concern and accepted him to initiate though he had no disciple and never need any.

Swamiji applied for the disability pension from his job because he doesn’t like sannyasis to beg for food in the streets, because of his boss’s request he became eligible for pension benefits which were granted as Rs.7 month. He enthusiastically abandoned all ties and began the path of Sannyasi and in the very meantime, he attained the state of Paramhamsa, Swamiji was named Srimat Swami Pranabananda Giri Parivrajakacharya.  He was staying and serving his Sannyas Guru and often visit Yoga Guru Sri Lahiri Mahasaya and follows his direction in the Sadhana.

During this period Swamiji was fortune enough to meet with Mahavatar Babaji as Swamiji regularly asking Lahiri Mahasaya to see his Guru, Swamiji after discussing many matters with Babaji, Babaji told Swamiji that, “he was on the right path, keep working on it and you will see the fun later on”.

Swamiji was deeply concerned with the development of his disciples. Not only in Kriya, but he also took care to see that his disciples completed their karmic duties as well.  Swamiji received a lot of money from his followers, who requested Swamiji to build an Ashram at Benaras for himself,  but Swamiji replied being a Sannyasi, I never build a property again. His disciple Sananda constructed an ashram after Swamiji’s death and named as Panchavati Ashram at Rishikesh but Goddess Ganga washed that in floods and kept Swamiji’s word, “not build any Ashram” to reality.

A day before Jagaddatri Puja according to the Bengali calendar, knowing that his last day approached Swamiji at the appropriate time gave the blessing to his disciple, through the power of Yoga left his body.