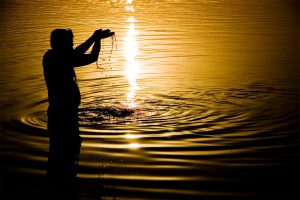 सनातन धर्म  meaning “eternal directive” has been proposed as a natural name. Sanatana Dharma is the actual name of what is now popularly called Hinduism. It is a code of ethics, a way of living through which one may achieve Moksha (enlightenment).

Sanatana denotes that which always is, that which has neither beginning nor end, that which is eternal in its true essence.  Dharma is designed to communicate the view which is an original or fundamental structure of natural law that is integral in the very basic constitution of an essential nature.

Thus, Sanatana Dharma refers to the eternal, natural way, the never beginning, and a never-ending flow of the whole of being. The terms Hindu and Hinduism are said to be more recently named, it is the world’s most ancient culture and the socio, spiritual, and religious tradition of almost one billion of the earth’s populace. Sanatana Dharma represents much more than just a religion. Sanatana Dharma thereby gives honor to individual spiritual experience over any formal religious principle. Wherever the Universal Truth is manifest, there is Sanatana Dharma — whether it is in a field of religion, art, or science, or in the life of a person or community.

Ancient Indian thought is the artifact and heritage of a unique civilization i.e., Indus Valley Civilization that flourished on the banks of the Sindhu river, where vanished but rediscovered Saraswati river in the northwestern parts of India.  In reference to the river, the word Saraswati occurs in the earliest of Vedic compositions,  which means a Goddess of Knowledge, because of the great advantages to the Vedic society that the river offered.  In the olden days when Vedic society was not as complex as our current globalized world, the very nature of its commonness provided a system of living based on Guna, the natural propensity of mind, and karma, the duties that fall on a group of persons according to their natural tendency. This was the basis of the division of human society into Four sects called Chaturvarnaa.  They are Brahmin, Kshatriya, Vaishya, and Sudra. It is important to understand that these categorizations were in the welfare or the scope for seeking enlightenment.

This was also true of women it was wrongly believed by all that women were barred from the pursuit of divinity through scholarly studies of Vedic texts. Sanatana Dharma gives equal preference in this regard, unbiased by gender, to natural merit and propensity. Likewise, women were denied access to Vedic education based on perceptions, and a prejudicial understanding of their physiological differences. The challenge for today, where faith is fast being replaced by reason, and ancient wisdom is troubled by ritual and superstition, is to cut through the corrupt, significant practices and bring out the core wisdom of Sanatana Dharma.

Bhagavad-Gita takes the form of a dialogue in Mahabharata between Arjuna and Sri Krishna, which stands out prominently as it spells out the core insight of Sanatana Dharma and the actual essence of Vedic knowledge.

Puranas are classified according to religious beliefs, such as Vaishnava, Saiva, Shakta, and Ganapatya. Puranas are composed in the subjective or circumstantial presentation which contains interesting stories and are meant to help common people to understand Vedanta or Upanishads without any misperception to more summarised and knowledgeable Shruti. There are other works which also classified as Puranas. There are three main Puranas: Ramayana, Mahabharata, and Bhagavatam.

Among the scriptural texts, another important category is the Agamas.  Those who follow the bhakti tradition consider Shruti’s (Which is heard) as Agamas.  Among the Agamas, the Pancharatra and Vaikhansa Agamas are rendered the highest place of prominence, considered as compositions of Lord Narayana.  Smriti (Which is remembered), some of the texts of Dharma Shastras such as Manu Smriti, Yajnavalkya Smriti, and many more whereas Smriti comprise all other texts, including discourses that clarify Vedantic law. The principles of Dharma are stated in the Manusmruti, which Hindus hold as an authentic guide to Sanatana Dharma.

These stand for a noteworthy resemblance to Patanjali’s Asthanga Yoga and are also the core philosophy of Bhagavad-Gita.  By inculcating these nine Ratna in our way of life is the essence of Sanatana Dharma.