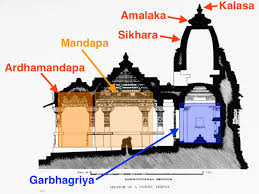 Temple Architecture: A sacred Hindu temple is a spiritual principle structure and divine body of God.  These spiritual structures symbolically represented in Hindu temples are given in Vedas and Upanishads.  And temple structural rules are described in various ancient scriptures like Bruhad Samhita.

A Hindu temple is a careful and deep meditative thought of our ancient rishis of India.  A temple dwells on ideals of dharma, arts, spiritual values, cultural traditions, beliefs, and the way of the life cherished under sacred Vedas of Sanatana Dharma.  Two broad orders of temples in the country are known as ‘Nagara’ in the north and ‘Dravida’ in the south.  The ‘Vesara’ style of temples is also found as an independent style, created through the selective mixing of the Nagara and Dravida orders.

The appropriate place for temple construction was suggested in sacred Vedas, i.e., near the confluence of rivers, ponds, riverbanks, and seashore.  At the decided site if the natural source of water is not present then, according to the Bruhad Samhita and Puranas a pond to be built in front of the temple or to the left side of the temple.  The areas of Hindu temple sites are usually vast with many of them built near water bodies, in the lap of nature. This is probably because according to ancient Sanskrit texts the most suitable site for a Hindu temple referred to as ‘Mandir’ is in close proximity to water bodies and gardens where flowers blossom, chirping of birds and sounds of ducks and swans can be heard and animals can rest without any fear. These places exhibiting peace and tranquillity are recommended by the texts for building Hindu temples elucidating that Gods reside in such places. The Significance of an Idol:  A great amount of Vedic science has also existed behind the selection of the idol or statue (Vigraham) of the temple to be built.  According to Puranas, Agamas, and Samhitas, the idol of God or Goddess was selected.  The idol is made with carved stone or wood.  When an idol is designed according to Shilpa Shastra with appropriate proportions and measurements, to sanctify the idol of God at different stages with specific mantras in the process to invoke the supernatural power of God (Prana Pratista) into the idol is very much important and those were given in Agamas and Tantras.