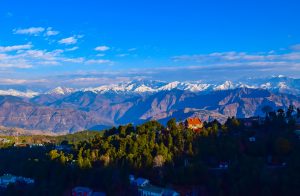 Himachal Pradesh is situated in the heart of the western Himalayas, identified as “Dev Bhumi” and is believed to be the abode of God and Goddesses. The entire State is punctuated with stone as well as wood temples. The mysterious valleys, rocky peaks, glaciers, and gigantic pines, and roaring rivers and exquisite flora and fauna compose the symphony that is forever Himachal. The State has a rich treasure of places of pilgrimage and of anthropological value. The State has also the pride of being the home to rishis like Vyas, Parashar, Vashist, Markandey, and also for Buddist Lamas.  Himachal Pradesh is one of the religious places about 84,000 God and Goddess resides there are they can be felt in temples in every area.

Himachal Pradesh is filled up with natural beauty. It is bordered by Jammu and Kashmir, Punjab, and Haryana.  There is a huge source of freshwater as rivers and by building dams on this lot of electricity are produced and sold to other states like Haryana, Punjab, etc.  Himachal Pradesh is a mountainous state and situated in the Himalayas. The main source of water here are rivers and glaciers. The main rivers are Chenab, Ravi, Beas, Sutlej, Yamuna.

‘Him’ in Sanskrit literally means ice or snow and ‘Alaya’ means Holy Land, which makes the Himalayas get its name meaning ‘Land of Snow’. While traditionally Himachal was known as a summer destination, the Department of Tourism of Himachal Pradesh has taken special efforts and developed diversified tourism products to attract tourists in other seasons too. Now Himachal is known as “A Destination for All Seasons and All Reasons”.

The climate conditions of Himachal Pradesh vary according to the area. Some areas are cold like Kulu-Manali, Chamba, Shimla, Dharamshala, and some areas have average temperatures. It has a combination of three-season cold, hot, rainy which adds more beauty to this state.

Himachal Pradesh State tree is ‘Devadar (Deodar)’, referred to as ‘Tree of the Gods’. Himachal is covered by trees of different types. the main trees are oaks, birches, sal, shisham, and flowers like lilies, marigolds, roses, tulips.  The plants which are unable to withstand the high humidity and cold not found here can be grown.