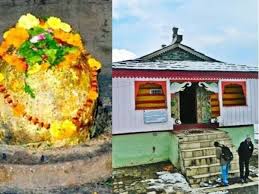 Bijli Mahadev temple is a sacred temple in the Kullu valley of Himachal Pradesh.  It is a  puranic temple.  It is at a distance of 22kms from Kullu.  One has to cross the Beas (Vyas) river on the way to Manikaran after taking a diversion.  To reach the Bijli Mahadev temple one has to go by a trek of 3kms. uphill. The name of the hill is called “Mathan.”  On the top of the hill in a temple, we can pay attention to Lord Shiva in the form of white linga.  The hill where Shivlinga is located is at an altitude of 2460 meters roughly 7500ft above sea level.  It is an ancient sacred Shiva temple.  From the top of the hill, one can see a beautiful panoramic view of the Kullu and Parvati valleys.  There is a 60 ft. height deodar pillar installed in front of the temple.

It is a unique temple on the face of the earth.  It is unique because the temple attracts flash of lightning (Bijili) every 12 years regularly from time immemorial along with a big storm.  A thunderbolt will fall straight-up on the Shivalinga and the Lingam will burst into pieces and be scattered all around.  But no damage will be caused to the temple building and surrounding area.  Heavy downpours will fall in the surrounding hills.  The next day the temple priest will come and open the doors of the temple.  He will collect all pieces of shiv linga and assemble all pieces in the form of Linga with the butter and paste of sandalwood and perform Pooja.  The lingam is perfect as it is, previously.  Even modern scientists can not find the secret behind this miracle.

There is an interesting legend behind this temple.  In the ancient period there lived a demon in the form of a big serpent (anaconda) bearing the name Kaulant.  He is a cruel demon killing the people of the surrounding areas.   He has grown up his body enormously in the form of circles obstructing the flow of the river Beas.  As a result, a big lake was formed and the demon decided to kill all the people of the surrounding area in the lake.  After knowing this Lord Shiva grew angry and decided to kill him.  He approached the demon and murmured in his ears saying that his tail caught fire and was burning.  The demon serpent raised his hood to see his burning tail.  Immediately Lord Shiva pierced with his trident on his hood and killed the demon.  Thus Lord Shiva saved the lives of his followers who belonged to that area.  At the request of the people, Lord Shiva appeared on the top of the hill in the form of Swayambhu Linga.  He also ordered Lord Indradeva to see that a thunderbolt will fall on the top of Shiva Linga along with a big storm, regularly every 12 years, so as to create confidence in the people of the area, that Lord Shiva is still there to protect them.

This place is very cold, covered with snow.  The temple will be opened only for a few summer months and closed for all the remaining periods.