(The wonderland on earth) The entrance of the cave is small and deep like a tunnel. Iron chains are provided to climb down into the cave. After reaching the cave inside one can find a spectacular rock formation of Sheshnaag with multiple hoods. The entire cave is electrically illuminated and very cool. It is believed that the cave is a temple with images of many Hindu gods. There are many wonderful images inside the cave viz. Seshnaag, Shiv Jata, Chardham (Kedarnath, Badrinath, Amarnath), Ganesh Ji, Holy Kund, a tongue of Kaalabhairav, Airaavat of Indra, Kaliyugaanth Khamba, Shivlinga with his Parivar, Taksha Naag, Shiva Joli, Shiva Asan, Paathal Devi, Kamadhenu, Bramha Kapal, Hans, Pandav Chopar, Paarijaata Viruksham, Elephant legs, Kamandal (water pot), and many other shapes of Gods and Goddess. 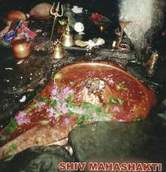 The Pataal Bhuvaneshwar cave is mentioned in Maanas Kanda of Skanda Puraan. Legend says that this cave temple is first discovered by Sun dynasty king Rituparna of Ayodhya in Treta Yuga. He fought with the demons with the help of Seshaanagh and later it was closed forever. Later in Dwapara Yuga the Pandavas rediscovered and opened the cave and performed Tapasya for Lord Shiva. In Kaliyuga in the year 1191AD sage Shankaracharya reopened the cave and performed poojas by appointing priests. Till then it is known to the public. It is believed that sages like Markandeya, Lord Hanuman performed Tapasya in the cave.

There are four entrances inside the cave. They are Randwar, Paapdwar, Dharmadwar, and Mokshadwar. Now all doors (Dwar) are closed.

It is believed that the cave is internally connected by the underground route to Mt.Kailash, the abode of Lord Shiva. It is also believed that the cave is connected to Chardham in the Himalayas. This is not a single cave, internally connected from one cave to another. Generally, it is believed, that such caves are connected to God’s abode and other Loka. Pataal Bhuvaneshwar cave is sacred and worth seeing in Uttarakhand, the Himalayas the abode of Gods (Devabhoomi).