Varanasi is the oldest inhabited city on the earth.   Varanasi existed since many Kalpas and Yugas.  This famous city is also called Varanasi, Benaras, Anand Kanan, Avimukhta Kshetra, and Mahasmasanam.  Kasi means the city of lights.  Varanasi means the city in-between two rivers i.e., Varuna and Asi.  Avimukta Kshetra means at the time of holocaust or annihilation Lord Shiva lifts Varanasi on his trident, to protect him from destruction.  Varanasi is famous for silk sarees and silk products.  Varanasi city is a Pancha Krosa acreage.  Mukti Kshetram means a sacred place for Salvation.  Lord Shiva promised that he will give salvation (Mukti) to all those people who died in Kasi including all other living beings.  It is believed that Lord Shiva whispers the Taraka mantra in the right ear of a person who is about to die and give Moksha.  Maa Parvati, Ganesha, and Maa Ganga will assist in getting salvation to that person.

The entire Pancha Krosa acreage in Kasi is most sacred according to Hindu scriptures.  Even though the area in Kasi is physically dusty and dirty, it is spiritually very pure and sacred and most powerful.  Kasi is a spiritual paradise in India.

Ganga is a sacred river flowing along with the Varanasi city.  Varuna and Asi rivers are tributaries to river Ganga.  There are more than 80 ghats to the river Ganga at Varanasi.  It is believed that those who dip three times in the river Ganga will get rid of all kinds of sins and get salvation.  Ganga water is very pure and sacred spiritually, even though the water is physically dirty and polluted.  The purity of Ganga water is tested by many scientists and confirmed its sanctity and purity.  Manikarnika is one of the most sacred ghats in the Ganga river, even though most of the dead bodies are cremated there.  Most of the people will immerse the ash and bones of their departed elders in Manikarnika ghat for salvation.

There are mainly three Khandas in Kasi viz, Omkaareshwar Khanda (head), Vishveswara Khanda (heart), and Kedaareshwar Khanda (waist).  Omkaareshswar linga is situated near Varuna ghat.  It is a very old and most powerful linga in Kasi.  “Om” includes three Beeja – “Aa- Vu – Ma”.  The last, fourth Beeja is Thuriya, not visible.  The three Beeja is having three small temples in Kasi Omkaareshwar.  The other two Thuriya Lingas are not visible to the naked eye, which are guarded by Serpent God (Naaga devata).  It is believed that there is a pathway to Paathala Loka from there.

Even though Omkaareshwar linga is the most sacred, many people of Kaasi never know about them.  The main reason is that the Linga (temple) is located in the Muslim area.  It is a very small temple situated in an elevated place.  It is in the midst of a Smasanam with Ghoris all around.  The other two temples and Vu kara and MA kara Lingas are located near that area.

‘Aa’ kara, ‘Vu’ kara, and ‘Ma’ kara Lingas are sacred, powerful, and ancient ones.  European scientists visited and tested these three Lingas and astonished about their power.  He proved that the Lingas made of stones are not from this planet and they may be from far-off planets.  He also proved that the anointed (Abhishek) water from the linga acquired medicinal properties which can cure many rare diseases.  It is very much painful for anybody to see the state of these powerful Lingas.  God is great.  He only knows what to happen and what to do.  We are only mere toys of his hands. 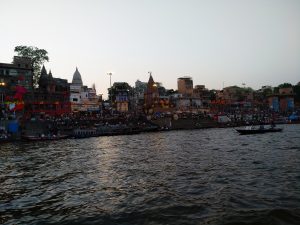 In Varanasi, there are 56 Vigneshwar temples in Seven Avaranas.  They are:

These 56 Vinayaka temples in Varanasi are important and powerful temples.  In addition to the above temples, there are some other more Ganapathy temples in Kasi.  They are also important.

One cosmology professor by the name of Johnmelwill of Colorado University did research in all 56 Ganapathy temples and found that the cosmic energy falls equally on all 56 temples and the temples are exactly located where cosmic energy falls.  He was astonished and proud of how Indian Rishis of the ancient period have such a great knowledge of the cosmos and its movements. The present Indian cosmologists should study and know many things from Indian Rishis and their scriptures.  The modern Indian scientists should know that—there is no such science known to the world other than what Indians know about it.

Ancient Rishis acquired all knowledge in all fields through  ‘Atindriya-Shakti’ acquired by doing tapas and meditation only and not by other means.