Bindu Madhav Swamy temple is the abode of Lord Vishnu in Varanasi.  At the request of Lord Siva, Lord Vishnu came to Varanasi to find a way to oust the Kasi king Ripunjaya, he was also called Divodass.  By his severe penance, he ousted all Gods including Lord Siva from Varanasi.  He ruled Varanasi for about ten thousand years following Dharma strictly, but he didn’t allow any god into Varanasi.  The act of King Divodass irked Lord Shiva as Varanasi is his abode.  So he sent Ganesh to Varanasi first and then Lord Vishnu to find a way to end the rule of King Divodass.  Lord Vishnu first stepped into Kaasi at Paadodaka Theertha along with Maa Laxmi.  From there he started his exercise in the guise of an ascetic (Shougata Roopam) Hindu Buddha.  He spread injustice (Adharma).  In the people of Varanasi and finally succeeded from expatriate the King from Varanasi by sanctioning him Moksha with his physical body.  Thus Lord Vishnu made way to enter Lord Siva into Varanasi again.

The Kaasi faced many invasions at different times by Muslim rulers.  The Mughal king Auranga Jeb in 1669 A.D had invaded Varanasi Nagaram and demolished many temples including the temples of Lord Vishwanath and Lord Bindu Madhav Swamy completely.  The Maratha ruler Bhawan Rao have renovated the temple in the 19th century.  Mughal emperor Auranga Jeb constructed Mosques in places of the above temples.  Still, they were not removed so far, because Hinduism is not a religion, it is Sanatana Dharma that obeys Secularism. 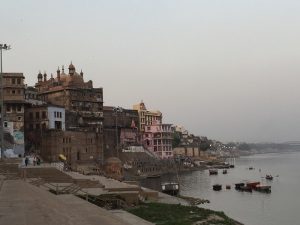 Pancha Ganga is an important and most sacred Teerth in Varanasi.  It is also called Pancha Ganga Ghat.  It is a very clean and calm place when compared to other ghats.  There is less crowded in this ghat and peaceful.  Taking bath or having a holy dip in Pancha Ganga Ghat is considered sacred.  It is believed that taking bath in this ghat will wipe out all sins and one will get Moksha.  It is also a sacred place to perform Pitru rituals (Shraddha) to the departed elders.  Pancha Ganga is a meeting point (confluence) of five sacred rivers viz, Ganga, Yamuna, Saraswati, Dhuta PaPa, and Kirana.  There is a stairway to the Bindu Madhava temple from here.

According to Skanda Puranam, there is a story behind the Pancha Ganga Teerth.  Once there lived a Rishi by the name Vedasira from Brigu Vamsa.  He is a very pious saint.  Once he accidentally saw an Apsara called Suchi.  After seeing her beauty his meditation gets disturbed and he lost control of his senses.  Afraid of the Rishi that he may curse her, she went away.  He realized his mistake.  As a result, a beautiful baby girl was born.  He accepted her as his daughter and has taken care of her.  He named her Dhuta PaPa.  She became a beautiful lady, as she grew up.  When she reached the age of eight, he realized that the girl reached a suitable age for marriage and asked her intention about marriage.  She replied that she will follow according to his wish.  Sage Vedasira advised her to do severe penance (Tapasya) to get a good husband of her wish.  She did severe penance.  As a result of the boon given by Lord Bramha, she became very pure and sacred that three and a half crores of Teerthas flow in her body.

One day Dharm Devata saw her and instantly fallen in love after seeing her beauty.  He expressed his intention to marry her by Gandharva method.  She said first he should obtain the consent of her father.  Instead of doing that, he made amorous attempts with her.  She became furious and cursed him to become a river.  He also cursed her to become a river in retaliation.  She is afraid of the curse given by him, approached her father, and explained everything to him.  He understood the situation and thought that Dharma Devata is a suitable groom for her and gave his consent for their marriage.  Thus they became one by getting married as rivers.  Thus Dhuta Pa Pa became so sacred river to wipe out the sins of people, as three and a half crores of Teerthas are flowing in her.  River Kirana was born out of Swed (sweat) of Sun God.  Thus, Pancha Gangaa Teerth has become a sacred place for taking bath, as it is a confluence of five holy rivers.

Lord Shiva as Gabasteeswara in Linga form and Maa Mangal Gowri and Mayukaaditya Kund are also present in the temple premises of Bindu Madhava Swamy.  Srimutt is also there nearby.  To take bath in Pancha Ganga ghat in the month of Maagha is considered as most sacred.

Pancha Ganga Ghat is a most pious Teerth and taking bath and performing Pitru Pooja are very important here.  One must visit this place invariably in Kaasi Yatra and get the blessings of Lord Bindu Madhava Swamy.