Kedareshwar temple is situated in Kedar Ghat in Varanasi.  In the Kedareshwar temple, Lord Siva appeared in Linga form.  It is considered that Kedareswara lingam in Kasi is equal to Kedareswar Jyotir Lingam in the Himalayas.  It is believed that Kedarnath (Siva) appears with 15 Kalas in Kasi, whereas, with one Kala in the Himalayas.  Kedareshwar Teerth in Kasi is a most sacred one.  Hara Paapa Hradam in Kedarghat is also powerful.

In the Kedareshwar temple, apart from Kedareshwar lingam, there are many Parivaara devatas like Maa Parvati, Lord Ganesh, Lord Subrahmanya Swamy, Nandi, Veerabhadra Swamy, etc., in the temple.  There are also six Lingas on all sides of the main Lingam.  They are  Chitrangada lingam in North, Neelakanta Lingam in South, Ambarisha Lingam in Vayavyam, near to him Indradyumneswara Lingam, South to him Kaalanjeswara Lingam, on North to him Kshemeswara Lingam.  All the Lingas are powerful and capable of curing different types of diseases.  Those who visit Kasi should also visit the Kedareswara temple, which is most sacred and powerful.

There is a story behind Kedareswara lingam.  This story is narrated by Lord Siva to Parvati maa at her request.  One Brahmin Brahmachari came to Kasi from Ujjain city.  He saw many Pasupatha Diksits (Those who are well versed in the Pasupatha sect) with long beards, hair (Jhatas) with holy ash (Vibhuti) on their foreheads in the Kedareswara temple.  Out of them, he selected one Pasupathi by the name of Hiranya Gharbha as his Guru.  His Guru converted him to Pasupatha.  He became an expert with the guidance of his Guru.  He considered his Guru as Lord Siva and served him.

Once he along with his Guru went to Kedara Yatra in the Himalayas.  When they reached Mt.Asidhara on the way, his Guru suddenly died.  In the presence of all Pasupathas, a Divya Viman (celestial chariot) descended from the sky.  Lord Siva s followers (Parshadas) took his Guru to Kailash in the Viman.  Then all of them completed their journey to Kedar Yatra in the Himalayas and came back to Kaasi.  From then onwards the disciple Vasishta made a habit to visit the Kedar temple in the Himalayas in every Chaitra masa and completed 61 Yatras to Kedarnath.  He became old, still, he wants to do Yatra to Kedar in Chaitra masa.  All elders objected to him not to go for Kedar Yatra.  But he didn’t stop going.  Seeing his perseverance Lord Siva appeared before him and offered a boon to him.  He saluted Lord Siva and asked Him to give salvation to all his followers. Lord Siva felt very happy for his request, and for his helping nature to others, and offered another boon to him.  Vasista requested Lord Siva to come to Kaasi and live there in the form of Kedareswar Linga and give Moksha to all who visit him.  Lord Siva promised him that He will live in Kaasi as Kedareswar Linga with his 15 Kalas and stay in Kedar in the Himalayas with one Kala only.  Thus Lord Siva lived in Kaasi in Kedareshwar Linga. 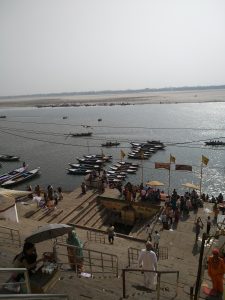 Kedar Kshetra is a most sacred place, and its reference is made in many Puranas like Skanda Puran, etc.  One must visit this place and see the spectacular view of, Kedar ghat from this temple.  It looks very beautiful especially at dawn and dusk and at Sunrise.  One can enjoy the beauty of Kedar Ghat sitting on the steps in the evenings.

Those who read and listen to the story of Kedar linga will get the blessings of Lord Kedareswar.