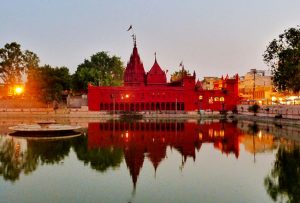 Durga Mandir is a famous temple in Varanasi (Kasi).  It is a holy and powerful temple.  The temple is dedicated to Maa Durga Devi.  She is an embodiment of Power and Strength.  She is the consort of Lord Shiva.  There is a big pond (Kund) by the side of the Durga temple.  Previously the Kund was connected internally to the Ganga river, now it is closed.  This temple is situated in Durga mandir street, Anandbagh, Bhelupur in Varanasi.  It is nearer to Tulsi Maanas Mandir 250 meters towards North and Sankat Mochan Hanuman Mandir at a distance of 750 meters, and  Benaras Hindu University (B H U ) at a distance of nearly 1.3 km.  There are other deities (Parivara Devatas) around the temple.

There is a story in Skand Puran regarding this temple.  There was a demon by the name Durg, son of King Ruru.  After severe penance, Durg obtained a boon that he could not be defeated or killed by any God or creature.  He invaded all the Lokas including Swarg Lok (heaven) and driven out Lord Indra and other Gods from Swarga Lok.  All the Gods went to Lord Maheswara (Shiva) and requested Him to save them from the torture of demon king Durg.  Lord Shiva and Maa Parvati gave them shelter.  After a long war, Maa Parvati killed the demon king Durg and freed all Gods.  Hence She was called ”Maa Durga”.

According to historical evidence, the origin of the Durga temple in Kaasi is as follows –

Once there was a great King by the name of Dhruvasandhi, who ruled Ayodhya of Kosala Desa of the Sun dynasty.  He married two women.  The elder women were Queen (Pattamahishi), by name Manorama, had got a son by name Sudarshan.  The second wife got one son by the name of Satrujit.  One fateful day the king Dhruvasandhi went hunting in the forest. Suddenly a big lion falls on him and killed the King.  There arose disputes between the supporters of the two sons for the throne because there was no King.  At last, the followers of the second son won the battle and Satrujit became the King of Ayodhya.  The first wife Manorama along with her son Sudarshan went to exile into the forests and got shelter in the hermitage of Sage Bharadwaj.  Sudarsana as a young boy learned all Sastras (scriptures) and Dhanur Vidhya (archery) etc., from sage Bharadwaj, as his Guru.  He also practiced the Kaamaraja mantra (Kaleem), the beej mantra of Maa Durga, and got her blessings.

Shashikala, the beautiful daughter of  Kaasi King Subaahu, was also a devotee of Maa Durga.  Mata appeared in her dream and suggested she marry Sudarshan, who was living with sage Bharadwaj in the forest.  So Shashikala was very fond of Sudarshan to marry him.  She told everything to her mother, and in turn, she reported the matter to her husband Subaahu, the king of Kaasi.  As a custom of their kingdom, the king announced Swayamvara about his daughter’s marriage.  All the kings attended the Swayamvara to marry Princess. But, Shashikala didn’t like Swayamvara, as she has already made her mind to marry Sudarshan.  So, she bluntly refused to attend Swayamvara. Somehow, she convinced her father of the marriage with Sudarshan.  He was forced to agree and performed her marriage with Sudarshan secretly.  After knowing about the secret marriage, all the kings who attended Swayamvara waged war against the King of Kashi and Sudarshan.  After long arguments and war, Sudarshan and the king Subaahu succeeded in war, with the blessings of Maa Durga.  The story ended happily.  Subahu, the king of Kaasi, constructed a big temple to Maa Durga in the holy city of Kaasi as a token of gratitude. Simultaneously, Sudarshan defeated his enemies and became the king of Ayodhya.  He also constructed a beautiful temple to Mata Durga in the holy city of Ayodhya.

This story can be seen in Devi Bhagavata Purana.   Those who read or hear this story will get the blessings of Maa Durga.  This is a worth seeing and holy temple in Kaasi.  This is also called as Monkey temple because lots of monkeys can be seen here. Goddess Saraswati Mata is the Goddess of learning and education.  She is the consort of the creator Bramha (Pithamaha).  She is also the Goddess of ChatushastiKalas (64 arts), music, knowledge, and wisdom.  She is one of the Trisakti Matas.   The other two Goddesses are Maa Lakshmi and Maa Parvati.  She is the Vedic Goddess, mentioned in Rigveda, like a river Goddess and Goddess of learning.  In the Telugu language, she is called “Chaduvula Talli”.  She dressed in a white sari with garlands of pearls.  Always sits on a white lotus.  Her chariot is Hansa (Swan), occasionally Peacock.  Swan is a very intelligent bird.  It can separate water from milk. Hence She is called “Hamsavaahini”.
In Devi Bhagavatam, it is mentioned that at the time of the visit of Manidweepam by Trinity (Bramha, Vishnu, and Shiva) Lalitha Mata presented Tri Matas to the Trinity as their consorts. Saraswati Mata was presented as consort to Bramha, to assist him in the act of creation.  According to another source, Bramha has created Saraswati from his left rib bone, for his assistance. Hence she is called the daughter of Bramha. It is also mentioned in Devi Bhagavata Purana that at one time Lord Vishnu got three wives.  They are Lakshmi, Saraswati, and Ganga.  One day Saraswati and Ganga quarreled each other on a love matter and cursed each other to become rivers.  So they tuned in to two rivers  Saraswati and Ganga on earth, to wipe out the sins of those who dip or take bath in the two rivers.  Later Vishnu sent Saraswati as consort to Bramha to assist him in the act of creation.

She is revered as the Goddess of learning, education, music, and arts throughout India and also in other countries.  On her Jayanthi ie., Vasantha Panchami which falls in the month of Maagha and also in Dasara Navaratri.  She will be worshipped, especially children, in a grand way of getting a good education and knowledge. In eastern states like Bengal and Assam, they worship Sarada Mata (Saraswati) for getting good education and knowledge.  Many children will start their education “Aksharabhyasam” On Vasantha Panchami day for a good future.  Maa Saraswati will be worshipped not only in India but also in Nepal, Burma, Japan, China, Indonesia Bali, Thailand, etc.,  She is the Mother of Vedas.  She will be called in different names in different countries.  Jains and Buddhists also worship Saraswati Mata.  In Burma, She is called ‘Thurathdi‘.  Chinese called her ‘Biancaitian‘.  Japanese as ‘Benzaiten‘.  Thai people as ‘Suratsavad‘ or ‘Saratsavadi‘.  Tibetans as ‘Yang‘.  Romans as ‘Minerva‘.  Persians as ‘Anahita‘. Greeks as ‘Athena‘ or ‘Rhea‘.

Saraswati Mata is very fond of children because She loves children very much.  Those children who worship her from their childhood days will get a very good education and their future will be bright. She loves their sincerity, hard work, and discipline.  She will bless such children very well.  So children should cultivate the habit of worshipping her from their childhood days, besides doing hard work and being sincere in their studies and discipline.  The letter ”AIM” is the mantra to worship her.  One should cultivate chanting this mantra from their childhood days will get a good education and a bright future.
Let Saraswati Mata should shower her blessings on all children.