Yogis and Rushis of Ancient India 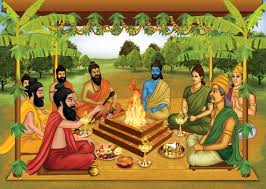 Yogi:  The word ”Yogi” is derived from Sanskrit, Yogi means who practices Yoga.  According to Indian religious scriptures, Yoga means ”to unite” or ”to join”.  To unite with Universal Soul by the means of meditative practices.  Yoga is not the physical exercises which were widely known by westerners today.  Yogi term is used for male practitioners and Yogini term is used for female practitioners.