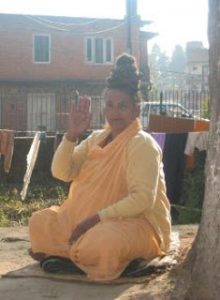 The Himalayas are towards the North of India. The country of Nepal is in the Himalayas. Towards the North of Nepal, there is a pond the name of Damodar Kund. Damodar Kund is situated towards the North of Muktinath temple, at a distance of nearly 35 km.  Beside Damodar Kund, there is a big hill.  On the top of the hill, there is a pond (Kolanu ).  A few steps down to the pond there is a big lake in a plain land almost in the centre of the hill. But it won’t appear to the human eye.  In the centre of this lake, there is an island. In the centre of that island, there is a big divine temple. Inside the temple, there are many black Shiv Lingam. There is a beautiful garden surrounding the temple. There are beautiful trees with delicious fruits in the garden. There are many shrubs with beautiful flowers of many colours and creepers around the trees. The fragrance of the flowers will spread all around the area. The beauty of the garden will attract anybody instantaneously. There are white and big Saalagramas in the lake. The water in the lake is very clear and transparent. Cool air will pass through always in the surrounding area. There are heaps of snow all around the lake.

There is a big Ashram on that island. The Ashram is in circular shape with 108 huts inside the Ashram. Only 55 huts are occupied with its inmates (Yogis). Almost all are young and in the same age group, except two yogis.  All are having hundreds of years of age because there is no death to them. All are immortal. There is a big prayer hall in that Ashram.  All yogis will assemble in the prayer hall and worship Lord Shiva.  The remaining huts are vacant and yet to be filled up. It is believed that the remaining huts will fill up by the end of Kaliyuga. There are many Kapila cows in that Ashram. All the cows will become pregnant without a bull and give birth to Calfs. Each cow will give milk continuously for twelve years. They are called Kaamadhenus. The milk will be useful for the yogis and for Abhiseka to Shiv Linga. The cows will themselves give milk in big pots and go into the surrounding hills for grazing. All the cows will come back to the Ashram in the evening., without anybody’s assistance. Only the cows and yogis will reside in the Ashram. The atmosphere is cool and calm in all seasons. There will be no Sun or Moon in that area. There will be sufficient light always in that area. Visibility is very good there.

The Yogis in that Ashram are immortal. If they want they will die at their will and wish. They will live hundreds and thousands of years. The least age of the yogi is 185 years. All yogis are mostly from India, Nepal and China. They will create everything they want. There will be no dearth for anything.  All yogis are happy and peaceful life there.

The above facts are narrated by the Himalayan Yogini  Shree Shakti Maatha Leela Devi. She has gone to Siddhashram in the Himalayas and lived there.  She had narrated her personal experiences in Siddhashram. On the advice of Yogi Mandal in Siddhashram, now she is living in Bankali Dharmasala, which is situated very near to Pashupatinath Temple in Kathmandu, Nepal. She is leading a peaceful devotional life thereby spending in the service of people. She will be always dedicated her life to the worship of God, deep in dhyana and leading Saadhu life.