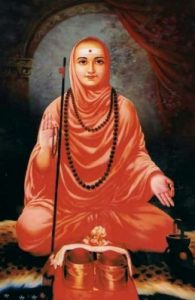 Sri Nrusimha Saraswati Swami was born in a pious bramhin family at Karanja in Maharastra.  Sri Swami was the second incarnation of Lord Dattatreya.  His parents Madhava Sarma and Amba were ardent devotees of Lord Shiva.

Amba in her previous life came across to Swami Sri Paada Sri Vallabha with her clumsy son who ran out from home to commit suicide, with the blessing of Sri Swami she devouted rest of her life in the worship of Lord Shiva.  As a result of that consecration she given birth to godly son, Narahari.  The child uttered OM ( OM – manifestation of the soul) at birth everyone there ashtonished with this miracle.  Astrologers ensured Madhava Sarma that their child was indeed an incarnation of the Lord. They also foretold that he would renounce all worldly ties and uplift the souls.

The child never speak a word untill he bestowed sacred thread (Upanayanam).  After that cermony he enunciate Gayatri Mantra, implemented the oath of celibacy, accepted the first offering (bhiksha) from his mother and recited sacred hymns.  According to tradition after taking Bhiksha he has to obey the vows and go for renunciation.  Narahari’s decision perplexed his parents and pleaded to withdraw his idea of handing over the pleasures of life.

For this young Narahari elucidated his duties in this incarnation and consoled his mother by saying everything in this world is changeable and perishable, the only purpose of every human life is Self-Realization.  Affection, responsibilities towards spouse and children is imaginary and illusion, you can overcome these all unreal matters only with the grace of God, so turn over in your mind and thereby you shall cross the ocean of misery and ignorance. Therefore Oh! Mother do not hinder me let me go.  Few months later you will be blessed with some more children.

Subsequently, Lord shown his Divine form to his parents, his mother with that wisdom, reminiscence her previous life, she said, “Lord, I bow before you, you are indeed Sri Paada Sri Vallabha Swami, who in my last birth saved me and my clumsy child”.  You were Omnipresent and eternal, I was in false delusion that you are my son, I will not obstruct your supreme will of renunciation.

Oh! Lord stay with us until the birth of another child.  Lord graciously assented to her request and stayed there for some time.  The blessed couple used to worship the Lord every day with full awareness.  He set out from home in joy to fulfill His mission which was to revive faith and inspire the people spiritually.  From there he went to Varanasi to acquire sanyasashram from Swami Krishna Saraswati as his Guru and received the name Sri Nrusimha Saraswati.

Sri Swami illustrated the meaning of the Vedas and the nature of Sanyasashram, which can secure the true objects of life (Purusharthas) to others. Then, he proceeded in his wanderings round the country in a clock-wise direction, along with his disciples. He took holy dips in all the holy rivers along the way moving from place to place for the welfare of common people and reached the sacred place where the river Ganga joins the sea, Ganga Sagar at Kolkata.

Sri Swami had seven disciples and they were Baala, Krishna, Upendra, Janajyotim, Sadaananda, Madhava and Siddha.  All have the title ‘Saraswati‘ suffix to their names.  Afterwards he went to Badrinath with his disciples.

After twenty years he reappeared at his home to the wonder and joy of his family memebers and villagers. He blessed them all.  He performed miracles to increase faith among people in a higher power and start them on the spiritual path .

Sri Nrusimha Saraswati Swami then went to Trumbakeshwar and Parli.  At Parli Vaijnath he did penance for one year and remained in seclusion. Afterwards he went to Audumbar and Amarapur near the confluence of the rivers Krishna and the Panchaganga. At Amarapur he stayed for 12 years. This place was called “Nrisimhawadi” and later “Narsobawadi”.  From Amarapur he went to Gangapur and remained there for 24 years. During his stay there many astonishing incidents and miracles took place, as “Siddha Purusha”with divine powers of healing physical ailments and alleviating worries of his devoutees.

Sri Nrusimha Saraswati Swami brought about a religious and spiritual renaissance and restored their courage.  The places where He stayed have become centers of piligrimage.  Gangapur is believed to be the abode of Lord Dattatreya.  There is a holy mound of Vibhuti (Holy Ash) from where devoutees pickup the Vibhuti Prasada to take home.  This mound of Vibhuti has not been reduced, even though the devoutees has been tking from centuries.  The atmosphere in all the three places is inspiring and devoutees feel peace and spiritually uplifted.

One day Sri Swami stood at the confluence of Bhima and Amaraja rivers under holy Ashwartha tree  and said,”Worship this tree and practice penance, your wish will be fulfilled and your life will be blessed”.  He announced his departure from this world to his disciples.  When the villagers heard the news of departure they all rushed to Sri Swami and begged him not to deprive them from His Divine presence, Sri Swami said, “Do not feel sad, for the grotesque vision I leave to Kadali Vanam near Srisailam, but I will ever abide at Ganagapur in my real state.  I pursue midday offerings in this village and accept all your services, my presence will be experienced by everyone at confluence of holy rivers Bhima and Amaraja (Sangam), Ashwartha tree and worship holy Padukas (foot wear)”.   The wishes of those who worship Sri Swami at this place with true devoution will be fulfilled.  Indeed the Lord is ever present for those who adore him, Sri Swami can be seen by  righteous people even today.

A float was prepared by banana leaves and decorated with flowers, placed in the river, Sri Swami sat on it, all diciples offered worship with grief driven hearts, Sri Swami cheered them and told them that he was going to KadaliVanam at Srisailam as a mark of reaching there bunch of flowers came floating in the river, soon after some time the same thing happened and disciples of Sri Swami took those flowers as his Prasad.