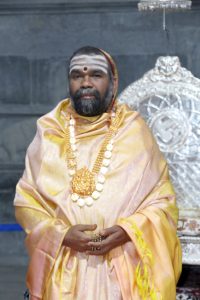 Importance of Place:  Ancient Kshetras populated by ascetics and sages are highly praised and respected in the Vedic tradition.  Hariharapura is one such ancient kshetra located in the Chikmagalur district in Karnataka. The Tunga river flowing in the north direction (Uttaravahini) at Hariharapura.  At holy places (Kshetram) where rivers flow in the north direction are considered as ‘Siddha Kshetras’, performing any kind of spiritual practice improves spiritual and material lives.  In myths (Purana) and various Vedic texts, seers praised Hariharapura as one such Siddha Kshetra, the great pilgrimage which takes out one’s sins. According to Skanda Puran, Sahyadri Kand Hariharapura was the place where Daksh Maha Yagna took place, so it addresses Hariharapura as ”Daksharama”.  As per the historical details, an ancient temple of the self-manifested idol of Lord Shiva, known as ”Swayambhu Dakshahara Someshwara” is there.  At that time Hariharapura is called ”Kapalam”.  Thus, being the sacred land where Lord Shiva emerged as Yagna Purusha from Homa Kunda of Daksha Prajapati, Hariharapura is regarded as Yagna Bhoomi, a very pious place to perform Homa or Yagna.

According to scriptures, Agastya Maharshi after pacifying Vindhyachala moved to the south and done penance at many holy places.  When he came to this holy place Hariharapura performed severe penance for Sri Lakshmi Narasimha Swamy deity and Salagrama.  Lord appeared before him for his devotion and blessed him.  Since then Hariharapura is a prominent Lakshmi Narasimha Kshetra.  Thus, having been the Tapovanam of Agastya Maharshi, Hariharapura is praised as Tapo Bhoomi also. Other places to see at Hariharapura was a four-hundred-year-old temple of Lord Shiva and Lord Vishnu located across each other on the banks of the river Tunga.  Sri Someshwara Swamy temple has complex carvings depicting the entire Ramayana on its three sides.  110-year-old hanging pedestrian bridge built across the river Tunga is a unique cable suspension bridge.  In the lush greenery of Western Ghats Arogyaniketana Ayurvedic Ashram is also located in Hariharapura.  At a time when Ayurveda and its benefits are commercialized and innocent people are cheated in the name of massage centers, this ashram strives to guide people with pure Ayurveda to develop a healthy body and mind and understand the real Ayurvedic principles.